Asterix doesn't seem to have garnered much popularity outside of Europe, but I have very fond memories reading the comic books during break times back in junior school (which had a small library of them). In those days, Asterix (along with Garfield) was one of the few books I could be cajoled into reading.

A shame then, because the rest of the world missed out on the excellent Asterix, the first in a series of platformers released for the Master System (Sega's popularity in France at the time no doubt played a part in their choice to license the rights to the popular cartoon Gaul). Thankfully, though we may rightfully live in dread of the video game tie-in, this is no lazy cash grab, but a rather decent little platformer on a par with Sega's Disney collaborations of the era.

The graphics are bright, bold, colourful and very true to the source material. Asterix and Obelix are both nicely detailed and well animated. As with Sega's Disney efforts, the sprite and background art is excellent throughout, capturing the charm and humour of the comic book very accurately. Visually, it's a feast for the eyes and still looks great today.

Gameplay wise, anyone familiar with Castle of Illusion will be right at home here. In fact, the games are so similar, I wasn't at all surprised to learn that both games share some key development personnel. From the the gameplay mechanics to the way each level is divided up, it's all very familiar. 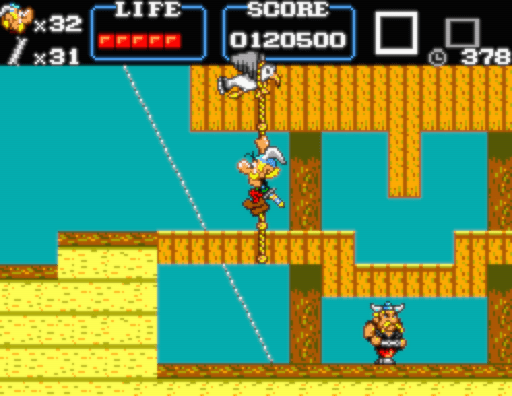 As may be expected, each character has different abilities. Obelix is slow but strong, capable of breaking blocks with his noggin or his bare fists. Asterix, on the other hand, is nimble and possesses greater jumping abilities, though he'll need the help of power-up potions to break any blocks he encounters throughout the game. Indeed, both characters will at times need to use special potions to overcome certain obstacles.

Rather uniquely, the level design actually changes depending on which character you choose to play as, giving you alternate layouts and obstacles to navigate. This greatly adds to the game's re-playability, it's almost as if you get two games in one! And when you get stuck trying to beat a level with Asterix, the option to try your luck with Obelix provides a welcome respite from the frustration of getting nowhere.

Granted, there may be nothing groundbreaking here. Bop enemies, jump on platforms, avoid hazards, break blocks and jars for bonus items and power-ups, solve puzzles, search for the key to exit the level... rinse, repeat. You know the drill. It's just typical 90's Platforming fair, but very well executed.

While it's a tricky game in parts and there are certainly times when the fun gives way to frustration, I believe most people willing to persevere could beat the game in an afternoon (thanks largely to the mercy of infinite continues). Overall, I heartily recommend Asterix. Without a doubt, it's one of the better experiences on offer from the Master System's vast library of platformers.

Point of interest: Asterix is a bilingual game and the only Sega Master System game I can think of that gives players a choice between in-game languages (French or English). 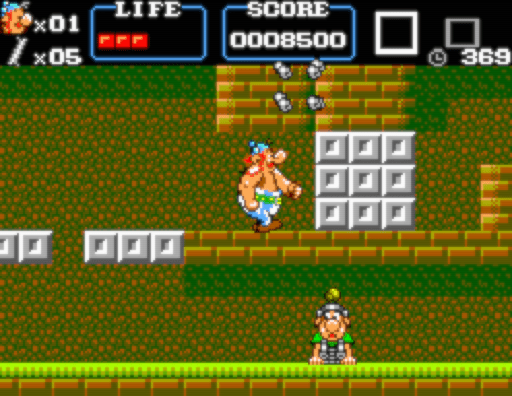