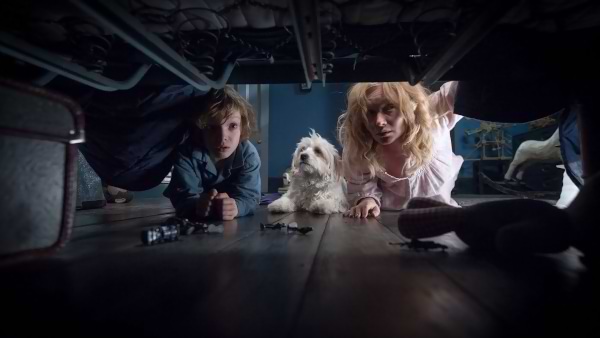 The Babadook follows a struggling widow as she tries to balance the demands of a stressful job with the care of her troubled young son. Life is hard enough for the both of them, but when a disturbing pop-up storybook about a menacing bogeyman figure called "The Babadook" mysteriously appears in the boy's bedroom, things are about to get a whole lot worse...

The Babadook is one of those horror films that works on multiple levels. On the face of it, it's a deeply unsettling supernatural horror about a boy and his mother being terrorised by a relentless, shape-shifting Bogeyman. A slick, well made modern revival of German Expressionist horror if you will. But dig a little deeper and it soon becomes apparent that it's really a film about a family dealing with the aftermath of a tragic loss. Viewed in this light, the Babadook is not so much a traditional bogeyman, but a corporeal manifestation of unresolved grief and trauma.

The Babadook is the black cloud threatening to overwhelm you. Let it in and it will bury itself within your soul. Corrode you from the inside out. It's explosive rage. The thousand-yard stare. The feeling of helplessness and despair, of isolation and dislocation from reality. It's the dark voice inside your head that you cannot silence, pushing you ever closer to the edge of sanity.

Because as the poem in the storybook says; "If it's in a word, or it's in a look, you can't get rid of the Babadook". In the locked basement of your mind, he'll always be there. Waiting in the darkness. Feed him if you must, for he grows stronger if you try to ignore him.

The question is, will you be able to keep him at bay? Hold your loved ones a little closer and you might...

The Babadook is not just a great horror film, I found it to be a very affecting family drama as well. And on a more personal level, I can honestly say this film helped me to better understand some of my own difficult childhood experiences.

(To me at least, supernatural horror is almost always the most frightening type of horror. We mortals are powerless in the face of it)