I always wanted a Barcode Battler back in the early 90's. Now it's 2019 and I finally have one (bought from a local flea market for the very reasonable sum of £5. The guy said he wanted to get rid of it). The condition of the box is poor, all the cards have holes punched into them and it's missing a few power input cards, but for £5 I'm not going to complain. Anyway, no big deal, this is the information age, so I was able to make some replacements using scans I found online.

You may wonder, can it really be as bad as everyone says it is? After all, this little oddity was a smash hit with the kids in Japan. It must have had something going for it. Right? Read on to find out...

For those who did not live though the early 90's, the Barcode Battler may not be familiar to you... Well, there's a reason for that. It flopped. Big time. After much hype, the handheld barcode scanning LCD game from Epoch (distributed worldwide by Tomy) hit shelves sometime in 1992 (or 1993) and in less than a year, would disappear from those shelves just as quickly. So what went wrong?

For one, the console was hideously expensive for what it was. Holding this thing in my hands, feeling the light, cheap plastic and looking at the minuscule lCD, it's hard to see why this handheld cost £33 to buy (down from its £40 launch price and equivalent to £66 today). Perhaps the high price reflected the cost of barcode scanning technology in those days? I don't know. I do know, however, that you could buy a Nintendo Game Boy with Tetris from the same catalogue shop for only £49.99 (or about £80 in today's money). Which brings me on to the second reason it failed...

It was billed as a potential competitor to the Nintendo Game Boy and the Sega Game Gear. Perhaps it was the media's fault for hyping the machine but I'm sorry, that was never going to fly. Retailers seemed to have had a better understanding of the product's place in the food chain than Tomy's marketing people ever did. Here it is slumming it with the LCD game watches in the 1993 autumn/winter Argos catalogue: 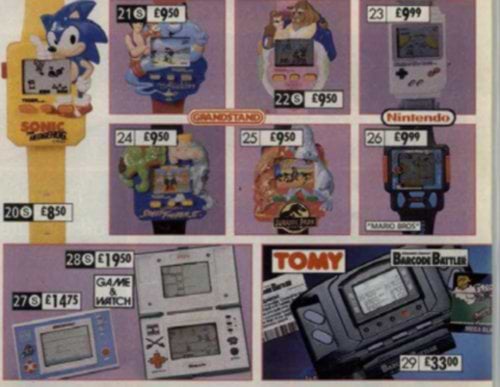 All of these Game Watches are now expensive collectibles. The Barcode Battler... Not so much. 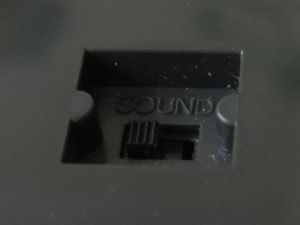 Thirdly, it's basically an RPG game minus the fancy graphics. I'll go into more detail about this later, but that's essentially what it is. At a time when RPG games lacked the broad popularity they enjoy today in a Pokemon crazy world, this was always going to limit the appeal of such a device.

I think this also goes some way to explain why the Barcode Battler was such a big hit in Japan. By this point in time, the country already had a mature RPG gaming market to tap in to, but no such thing would exist in the west for some years.

Could the Barcode Battler have been a success outside of Japan? I think so. Perhaps they should have cut the price of the Battler by half and made their money back selling compatible cards at pocket money prices. The console market has operated under a similar business model for years. Besides, kids love collectible card games. After all, Top Trumps have been popular since 1978. 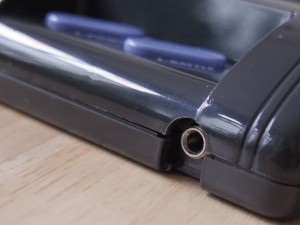 Or they might have tied the system in with a range of choose your own adventure & fighting fantasy books (supplying pop out barcodes for monsters and items, etc). Instead, they simply put the console on the market and then did nothing else with it.

But that's enough about the history, how exactly do you play a Barcode Battler? The concept, I think, is actually pretty clever. When you turn the game on, you must choose between three modes of play. The first mode (C-0) is a straight up versus mode. In this mode, you can use any of the supplied warrior & wizard cards, any of the supplied item cards or any of your own collected barcodes and use them to battle against a friend (who, I assume, will bring their own barcode collection to the fight). With nothing more to say, it's as straight forward as that. But I think it's neat that you can fight each other using the same machine and don't need to buy another unit or a link cable. 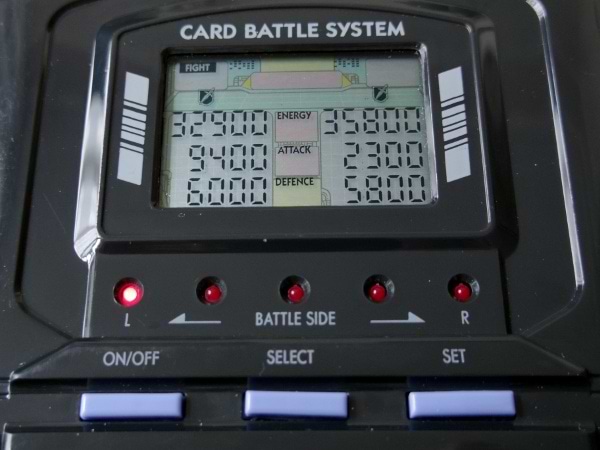 In the left corner, 4XAA batteries. In the right corner, a box of bran flakes. Things aren't looking good for bran flakes... (and no, I'm not 93 years old. Mock all you like, good digestive health is important at any age).

The second mode (C-1) is the main single player campaign mode. If (like me) you have no friends willing to play a nearly 30 year old LCD game, this is where you'll be spending most of your time. This is also where the RPG aspect of the Barcode Battler comes in to play. 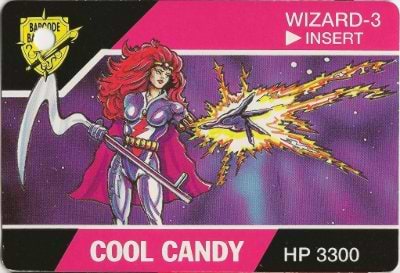 The first thing to do in this mode is to scan in your warrior and wizard characters. You can choose from the feeble roster of 6 included player cards if you like, or you can go barcode hunting to create your own (hopefully) stronger characters (but I chose to go with two of the included characters, anyway). Next, it's time to start fighting enemies. The "action" (if you can call it that) happens over 4 different time eras and 5 different "light worlds". Yes, there is indeed a storyline to this game. It's so cheesy and ridiculous that I'm not going to recount it here (this article is already going to be pretty long). Like so many of the worst things, it involves time travel for no sensible reason.

To progress, you first select a light world to visit. The Battler will then randomly select 1 of 5 potential enemies for you to fight (including one mini-boss). If the enemy looks too tough to beat right now, you can retreat by hitting the R-Power button (this isn't always successful however, forcing you to fight an unwinnable battle). Each enemy has a number that you can look up in the supplied "personal manual" (something like E1-L101, meaning in this case: era 1, light world 1, enemy 1). This'll give you a short bio and some nice character art to look at. It goes a little way towards making this feel a bit less like a pure numbers game (although it definitely still is). Some are even quite amusing, like this guy from the era 1 boss light world: 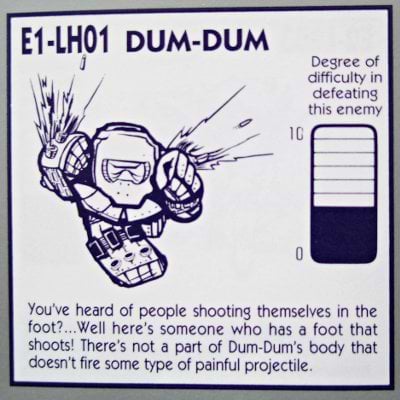 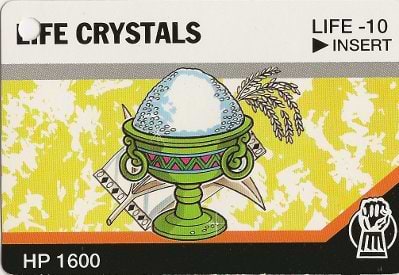 Before a fight, the battler will ask you to scan a Power Input card. These serve as power ups that'll boost your attack power or defense stats (Warriors only), magic points (wizards only), life energy or survival points (both types) and so on. When the battle commences, the battler randomly chooses a player to go first. On Your turn, you can either choose to attack (L-Battle button) or recover some energy (L-Power button, this uses survival points). I think hitting these buttons as "Fight" or "Recovery" flash on the screen increases their effectiveness, but I can't be sure of that.

Naturally, wizards can also use magic (accessed with the select button), allowing them to steal magic points, buff their own stats, nerf their enemy's stats, prevent the use of survival points, etc. Suprisingly, it's a much more complex game than I expected it to be. There is genuine (albeit simple) strategy to the game. You're nearly dead but so are they... should you recover your energy or gamble on a super hit to finish the battle? Do you buff up your own wizard's stats, or is it more effective to nerf your opponent's? Choices like these will be familiar to all RPG gamers.

You must clear each light world of enemies in this way, adding a little of their stats, survival and/or magic points to your own to level up, as you hunt for the three keys that will unlock a particular era's boss world (containing 5 tough mini-bosses to defeat). Once you defeat these bosses, it's onto the next era and so on until you have completed the entire campaign. Oh, I forgot to mention... Like any good RPG, you can thankfully save your progress after each battle by hitting the R-Battle button (the same button also loads your save file at the C-1 mode wizard/warrior entry screen). It would be impossible to complete the game without this feature, I'm certain. 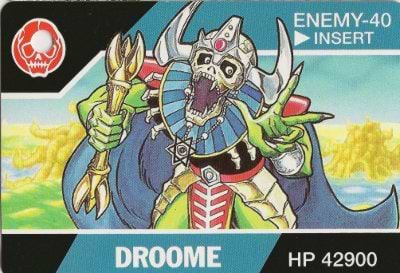 The third and final mode (C-2) is essentially a boss rush (these bosses are the ten over-powered enemy cards included with the game). You need to obtain passcodes from each completed era to gain access, however (I've yet to achieve this).

So what are my final thoughts? Should you get one? I honestly don't know. Does it sound like something you'd like? I'm ashamed to say this, but I've actually quite enjoyed playing with mine. Taking down enemy after enemy with my wizard & warrior combo in the main campaign mode has been frustrating at times (the computer enemies definitely feel "luckier") but also, dare I say it, kinda satisfying. I've even enjoyed scouring the cupboards for all-powerful barcodes to use. While that may say more about me than the Barcode Battler, I'm nevertheless happy to have added this curiosity to my handheld games collection.

All that said, I'm not sure an 8 year old version of me would have had the patience to persevere with it. It lacks the intuitive and immediate gameplay that I favoured as a kid.

At the end of the day, it's just meaningless barcode generated numbers on a tiny LCD screen, battling each other to the accompaniment of shrill bleeps and bloops. So if that sounds like your jam, then go for it...

Me? I'm off to settle some childish arguments. Is Coca Cola really better than Pepsi, I wonder?

Nintendo & Namco fight back with the Japan exclusive "Barcode Boy"