A Look at some Master System Clones

Nintendo Entertainment System clones, AKA “Famiclones” or NOAC (NES on a Chip) systems have been a permanent fixture of the international video gaming scene for well over 30 years now. But did you know that clone consoles of Sega's one time 8-bit competitor also exist?

In contrast to the many knock-off Nintendo consoles available, the vast majority of Master System clones on the market are legitimate products officially licensed by Sega. For better or worse, Sega have always been much less protective of their IP than the big N.

Side note: I'm curious as to why the many pirate operations out there appear to be completely disinterested in cloning any of Sega's old 8-bit consoles. I honestly can't figure out why they don't. After all, it has a fairly large game library, albeit not one as large as the Famicom's. And in this day and age, the hardware is just as easy and cheap to clone as Nintendo's heavy hitter. It's a puzzle...

I have two such systems in my possession to show you. So without further ado, let's get to it. 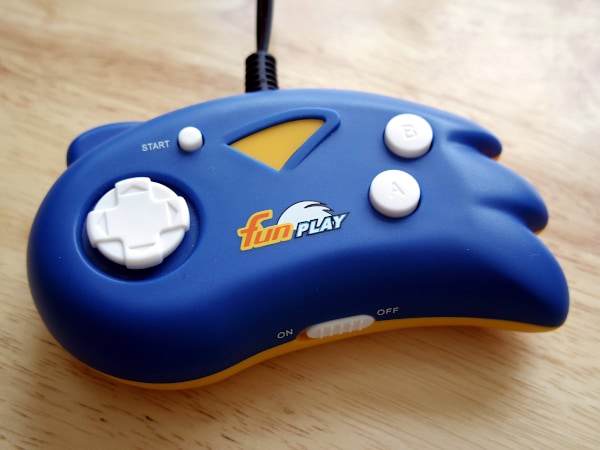 First up is the Fun Play 20-in-1 plug and play console: This is a self contained plug and play system manufactured (I think) by a company called Freetron using technology designed for (or in collaboration with) the more familiar Atgames. According to Segaretro, it was released in North America sometime around 2009 but I imported my console directly from china through DealeXtreame.

Quality wise, first impressions are good. The case plastic is fairly high quality and reassuringly robust. The D-pad, though small and not much bigger than my thumb, is responsive and comfortable to use. Likewise, the buttons also respond well, with a nice clicky feel to them and no mushiness (one minor gripe here is the use of A/B buttons instead of the 1/2 buttons used on genuine hardware). But best of all, and the real reason I bought this thing, is the styling of the case. I love how it echos Sonic's design. Yes, it's a bit of a novelty and the spikey shape hardly makes it ergonomic to hold, but look at it! It's cute as a button and gets 10/10 for looks as far as I'm concerned.

Output is Standard definition only, using a very long A/V cable (seriously, it's at least 6 foot). Sadly, it's not the best quality and mine has already started to wear a little at the stress point as it enters the case. I might try replace the output with a 3.5mm jack one day, if and when it does eventually break. Video doesn't seem to be 100% stable to my eyes, with some very slight flickering, but it looks crisp enough on a CRT television (those of us in PAL regions will of course need a TV capable of accepting an NTSC signal). The issue could be down to my PAL TV, but in any case, it's not really a distraction. 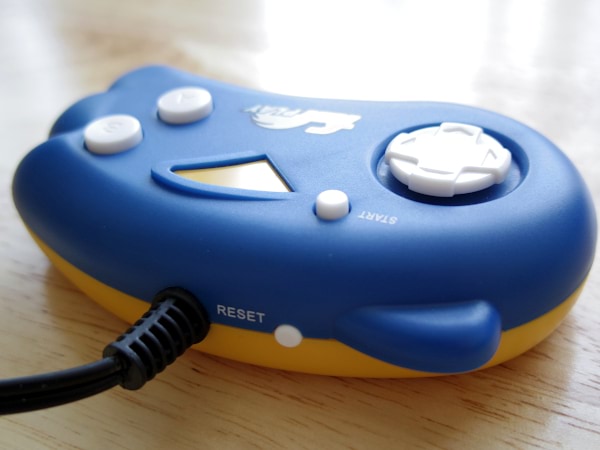 How is the emulation? Pretty good, actually! Colours are for the most part accurately reproduced. Music can be a little shrill on the high notes and the noise channel is a little raspy, but otherwise the sound is fine and I can't really fault it. In some respects, it's actually an improvement over the original hardware. Most of the games play a little faster, but the most dramatic difference can be seen in Golden Axe. All trace of the slowdown plaguing the game on original hardware is completely gone! It's the fast and furious action game it was meant to be and I'm sure most people will find it a great deal more playable as a result.

So far so good, but what about the games? Well, here's were things get a little less impressive. The games included are something of a mixed bag. There are undoubtedly some classics here. Games like Fantasy Zone and Alex Kidd in Miracle World are genuinely among the best the console has to offer. For a console shaped like Sonic the Hedgehog, you might expect a significant portion of the games to be Sonic related and you'd be right. Sadly, they're not the best Sonic games. Out of the six Sonic games, only Dr Robotnik's Mean Bean Machine, Sonic Chaos and Triple Trouble are really worth playing. Sonic 1 and 2 are sadly absent and Chaos, Mean Bean and Spinball are all Game Gear versions, even though Master System ports of these games exist and would be better suited here. It's a personal preference, but I'm not a fan of playing Game Gear games on a big screen. They don't look right to me…

For those of you who like to see the guts of these things, here's what the Fun Play clone looks like inside: 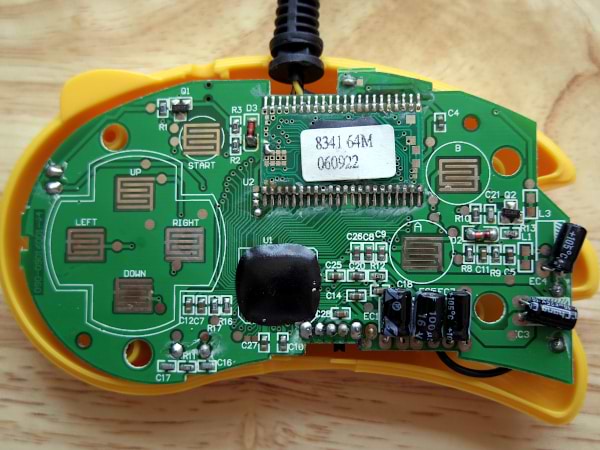 There's not much to it. Near the A/V cable you can see a rom chip, containing the games and (I would guess) the menu software. In the centre near the bottom of the board is the SMS logic, all squeezed into a single chip and encased underneath a blob of resin. 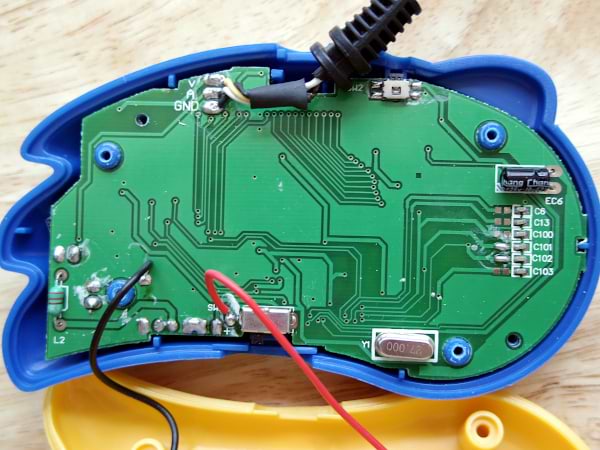 On the rear of the board, we can see the crystal oscillator and where A/V and power is input. I'm a dumb dumb when it comes to electronics, but I wonder if that crystal is multiplied by 2, then divided by 15 to give 3.6 mhz (similar to but slightly faster than the 3.57 mhz system clock of a real NTSC Master System).

Next up is The Arcade Player, a handheld clone system from Atgames. This is really the only clone of any kind we've seen to date here in Europe. Thankfully, it's also pretty good. It has a decent D-pad, responsive buttons and a reasonable screen, which could be better, but it's certainly clear enough to show up those tiny SMS shoot ‘em up sprites (anyone who ever tried to play SMS shoot ‘em ups on a fuzzy Game Gear screen using a converter will know it as the definition of futility). However, Atgames have been selling this particular console for over a decade now and it's difficult to believe the LCD technology couldn't be upgraded without adding much extra cost. 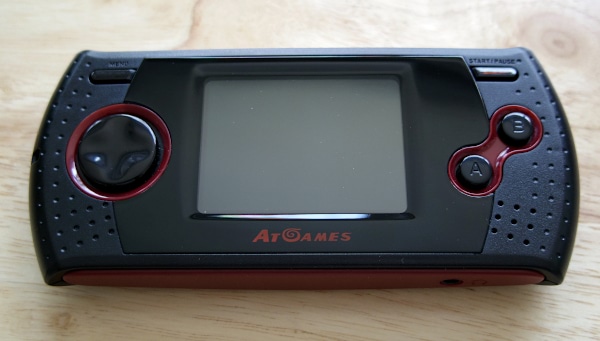 There are other criticisms to be made as well. Sadly, unlike Sega's own recently announced Game Gear Micro, it doesn't look at all like the real deal, but is instead housed in a cheapo generic handheld game shell. The same kind you find in their thousands on cheap Chinese electronics websites. It feels a little cheap in construction overall, like it would smash to bits if you dropped it (cheaper even than the Fun Play) and the screen protector is not toughened glass, just a very soft and easy to scratch plastic (to be fair, so was the lens on the original Game Gear). I'd recommend a carry case of some kind if you want to take this out and about. 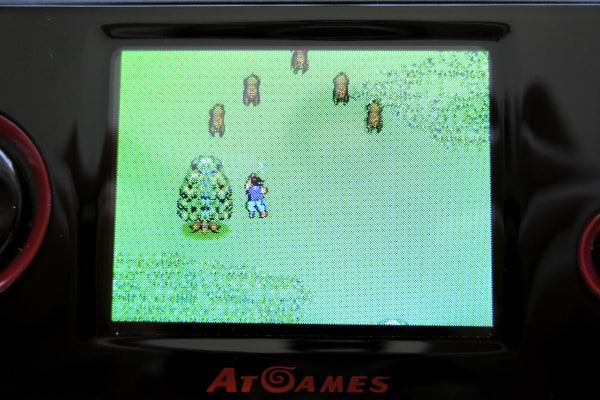 While it's primarily intended to be a handheld, it's also possible to connect this console to a TV. No cable for this is included, but the kind you need is not too difficult to come by. I use an audio cable (the same one I use for connecting a DAB radio to my Hi-Fi via the 3.5mm jack to RCA connections). The signal is crisp and clear on a CRT TV, but outputs only to a PAL standard. Dare I say it, the picture quality actually looks better than a real Sega Master System.

Once again, the Arcade Portable requires 3 AAA batteries (I'm sure it hardly needs to be said, but battery life is of course much improved over the original Game Gear). Those of us who grew up with it know the Game Gear as a real beast of a "portable" console. Big and heavy enough to barely be portable at all. This newer system is naturally much lighter, at roughly half the dimensions of the original and small enough to comfortably fit in a pocket. While I haven't taken this console apart yet, I would expect to see the same SMS on a chip technology as the Fun Play, with maybe some additional circuitry for the LCD screen. I was able to find details and images of a very similar console here and I suspect the internals are similar if not exactly the same.

Like the Fun Play, game selection is again a mixed bag and both consoles share similar libraries, but we do at least get 10 extra games here. A disappointing selection perhaps, but the handheld still contains a few solid gold classics, like Alex Kidd in Miracle World, Fantasy Zone 1 & 2, Columns/Super Columns, Baku Baku Animal, Sonic Triple Trouble and Ristar as well as some underrated gems like Astro Warrior, Dragon Crystal and The Ninja. Still, I could think of at least half a dozen games that should be on this thing in place of garbage like Alex Kidd High-Tech World and Global Defense. It shares the same emulation oddities as the Funplay but is likewise generally faithful. Weirdly, the unit contains the SMS version of Columns, which makes little sense when the Game Gear version would clearly be better suited to the small dimensions of a portable. It's the little details like this that give the impression Atgames didn't put much love, care or attention into this product. It's all about making a quick and dirty buck with those guys.

For all their faults, both of these systems make for nice collectables and while they may pale when compared to genuine Sega hardware, they're not a bad introduction to Sega's two finest 8-bit video game consoles. 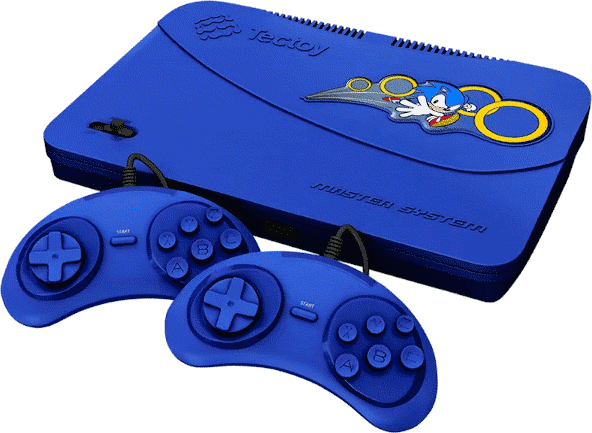 Owing to Brazil's economic and sociopolitical factors, the Master System never went out of style there, co-existing to this day with a myriad of famiclones and other classic consoles as a lower cost alternative to the much, much more expensive modern games systems. As you can see from their website, Tectoy still sell what could be regarded as the ultimate Master System clone: The TecToy Master System Evolution. This is presumably another system on a chip console, (perhaps produced with the same tech licensed by Freetron/Atgames). Then again, it may also be emulation based. Not much is known about these systems and few people outside Brazil have ever seen one in the flesh.

Aside from the Sega consoles of yesteryear, Tectoy also sell some pretty sweet Master System merch, including a pair of rather fetching flip-flops. Imagine taking a stroll on Copacabana beach in these bad boys! 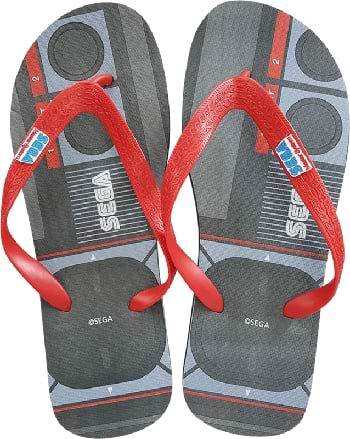 Atgames also made a pretty decent Mega Drive / Master System Flashback before Sega pulled the plug on their license. Only the second version with the SD card slot is worthy of your attention, however (but you must apply the firmware update). Even so, it has some pretty severe audio latency issues (as well as minor frame rate problems with some Master System games), which may limit its appeal to some. It cannot play cartridges either. Since that system is emulation based, I don't consider it to be a “true” hardware clone, so I won't review it here.