Let me begin this review by writing about Tetris. No really, hear me out! Tetris is not just the benchmark against which all other puzzle video games are measured. It is arguably the video game full stop. Tetris is to our hobby what Go or Chess is to gaming's low-tech board game forebears. Universal. Ubiquitous. Eternal.

Should humanity survive the potential horrors of the next 200 years. If we can persevere through nuclear war, climate catastrophe and the existential threat of A.I., so long as some kind of computer or electronic device still exists on this planet, eons after most other video games have faded into a dim and distant past. For forever and a day, I confidently predict humans will be playing Tetris in one form or another. I won't be around to see it, but somehow I still know this to be true.

So how does Columns stack up against the one video game most likely to outlast us all? Well, simply put, it's not as good. But then again, how could it be? But read on to see if it's still worthy of your time.

It's easy to see why Sega snapped up the rights to Jay Geertsen's colourful gem-based puzzler in the early 90's. Ported to the Game Gear, its use of colour as a vital game play element would instantly demonstrate to players the obvious technological prowess of their fancy new handheld (and as anyone who's played similar colourful games like Puyo Puyo or Bust-A-Move on the Game Boy will attest, there is a definite frustration factor to these titles on the ol' monochrome grey brick).

As many of you will know, the Sega Master System shares more or less the same guts as its younger handheld brother, so it should be no surprise to learn this home console port holds more in common with the handheld iteration than the Arcade and Mega Drive variants. For those who don't know, the basics of the game are pretty simple. Players must line up three or more gems vertically, horizontally or diagonally to clear gems from the well and score points. With careful gem placement, players can set up their well for a cascade of combos. This it the secret to gaining a high score. Once in a while, a helpful white gem will fall into the well. This gem clears all gems of the same colour it touches and can be a real lifesaver in the faster, later levels. Like all the best puzzle games, it's easy to grasp but difficult to master. 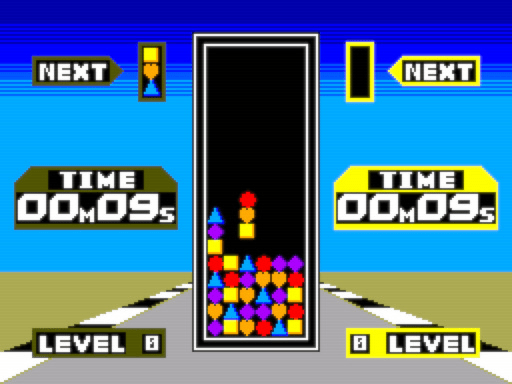 The graphics are of course nothing special but then they don't really need to be. It's a puzzle game, they do the job. The gems are naturally a little smaller and less detailed than their Mega Drive counterparts, but it hardly detracts from the game play. As with the Game Gear port, you can change the gems into a few other shapes, like fruit or dice if you wish, but I don't see much point in doing so. And while I'm typically dead set against moving backgrounds in puzzle games, the pretty starfield present in the single player mode is not too much of a distraction to the action. The music is also pleasant enough, though re-arranged slightly by composer Tokuhiko Uwabo to better suit the SMS sound chip.

If the SMS version has anything to recommend it over other home ports, it's the inclusion of the Flash mode (also present in the Game Gear and Mega Drive ports). Analogous to the B-type game in Tetris, this is essentially a race to clear a path through layers of garbage gems in an effort to reach (and clear) a flashing target gem at the bottom of the screen in the quickest possible time. It's a lot of fun and ideal if you just want something fast and immediate to play. Sega also thought to include a very welcome head to head competative mode for both Flash and Original game modes. Unlike with the Game Gear release, playing with a friend is easy. There's no tedious messing about with multiple cartridges and link cables here!

All in all more feature rich than the Mega Drive port, the Mater System title is arguably the best available version of the game. And unlike the Game Gear release, you don't need your own battery factory to be able to play it. It's certainly my favourite version, anyway. Whatever your platform of preference, Columns is a decent puzzler on any system, albeit one that most gamers have long forgotten about. It may not be quite as engaging as Tetris and the Puyo Puyo series gets all the love at Sega HQ these days, but I think it's still worth playing this old gem once in a while (if you'll excuse the pun).

Tetris continues to reign supreme over all, but it's colourful casual time-wasters like Bejeweled and bubble shooter that seem to be winning in the popularity stakes. These games obviously share more in common with Sega's defeated Columns series. Perhaps Sega can take a little solace from that.

Note: If you want to pick up a copy, here in the UK the easiest and cheapest version to find seems to be the one included on the Master Games 1 compilation cartridge (and the version of the game I've reviewed here). 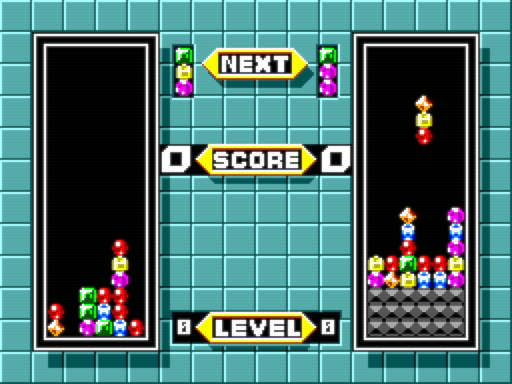