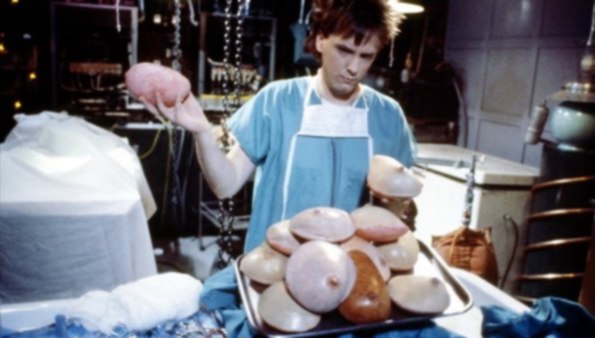 When a lawnmower invented by amateur scientist and inventor Jeffery Franken (James Lorinz) accidentally dices his young fiancee Elizabeth (Patty Mullen) into chunks at a family barbecue, Jeffery decides to use his scientific know-how to bring his tragic love back to life. But how? By building her a new body, of course; one constructed from the harvested bodyparts of New York city's working girl population.

As you may have already guessed, Frankenhooker is essentially a campy and irreverent take on Mary Shelley’s classic gothic horror novel. It’s not nearly as sleezy as the film’s title and premise might suggest, however. Sure, it may be set in a seedy pre-gentrified New York city and there’s certainly plenty of flesh on show, but as it’s presented with a knowing sense of absurdity and a tounge-in-cheek silliness, the result is a lot less exploitative than it might otherwise have been. Indeed, it might be the most "mainstream" film Frank Henenlotter ever made. But don’t be fooled, this is not his "Hairspray". Despite a 15 rating, it still manages to include most of Henenlotter’s favourite themes: body horror (relatively mild by his standards), sex, drugs, nudity, bodyparts by the boat load and his trademark lack of regard for good taste.

If you've seen Basketcase or Brain Damage, you already know Henenlotter's credentials as a premier exploitation film-maker, but it's the cast that deserves the real praise for making the film work as well as it does. Both of the main leads put in stand out performances. Lorinz is great as an unhinged New Jersey version of Dr Frankenstein and Mullen likewise puts in an adorably goofy performance as the titular Frankenhooker.

It hardly needs to be said that Henenlotter is the kind of film director that barely exists in today’s movie industry. Uncompromising to the last, it's not difficult to see why he hasn't been able to finance a film since 2008's Bad Biology. For better or worse, Frankenhooker is an interesting cultural artefact from a less sanitised age of film. If you enjoy schlocky B movies and you are not so easily offended, Frankenhooker is certainly worth watching. It's also probably the best introduction to Henenlotter's film-making output.

More silly than scary, this film is planted firmly in comedy horror territory. That said, some of the content is a lot stronger than might be expected of a 15 rated film.