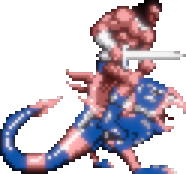 Ever since Sega's first ever console, the SG-1000, was given a thorough and comprehensive beatdown by the much more technically advanced Nintendo Famicom, Sega seem to have vowed from that point forward to always push the technological boundies when it came to their home console offerings. To try in earnest to give their fans an experience as close to the arcades as could be achieved for each of their home machines.

So when the time came in 1989 to port their recent fantasy themed beat ‘em up Golden Axe to their then ageing but still fairly powerful Sega Master System, they did not back down from a challenge. Arcade gamers of old lauded Golden Axe for three main reasons: big, bold, great looking sprites, the ability to ride cool fantasy monsters into battle and those visually stunning screen filling magical attacks. At first glance, looking only at screenshots of the game, you could be forgiven for thinking that Sega had pulled off a miracle... That is, until you play it.

The sprites are indeed absolutely huge and yes, those jaw dropping magic attacks are all present and correct, but the good looks come at a cost. Gameplay is incredibly choppy, especially when the action heats up. By the time three or more sprites are present on screen, you can feel your poor console strain as the animation begins to stutter. It doesn't by any means make the game unplayable, but it does expose the limitations of Sega's 8-bit system. Alas, the dream of an arcade perfect port was too good to be true. 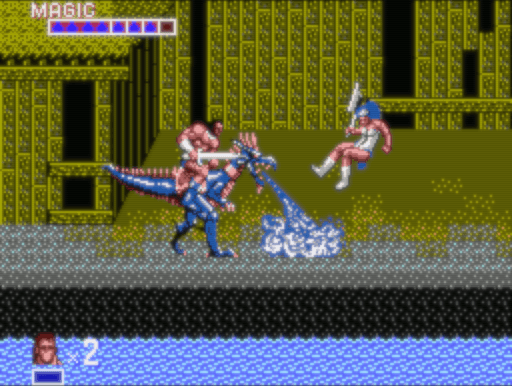 But looks aren't everything. A greater shame, in my opinion, is the omission of the game's slightly more interesting characters; the wonderfully named Gilius Thunderhead (my personal favourite) and the Amazonian Tyris Flare, leaving us with only the bland and ubiquitous barbarian to play as (named Tarik in this version, for no obvious reason). Needless to say, there's no two player option on offer here. We do, however, get to select their magical powers as a consolation (though I'm not sure if this has an impact on the relative physical strength of Tarik).

The rest of the game, from the backgrounds to the enemies, bosses and music, is very faithful to the arcade original. Even the ability to ride a beast into battle makes the cut. It's a marvel that Sega could keep so much of the game intact, all without resorting to the usual dirty tricks afflicting most 8-bit ports of 16-bit games, such as cutting out whole levels or using tiny, re-drawn "chibi" styled sprites. Everything is here as it should be. So why should you play it today? Weeell, obviously it's not as good as the Mega Drive conversion, so let's get that out of the way.

But it is by far the best 8-bit version of Golden Axe ever made (even beating out a few 16-bit conversions that should have been able to trounce it). So if you want to see what an 8-bit console looks like when working up a sweat, Golden Axe is worth a go. You may come away from the experience with the opinion that Sega bit off more than they could chew here, but you can't help but admire their ambition with this port. A noble if slightly misguided effort? You be the judge, but I like it. If I want to play a quick game of Golden Axe, this is generally the one that I reach for (when it comes to the Mega Drive, I much prefer to play the sequels). 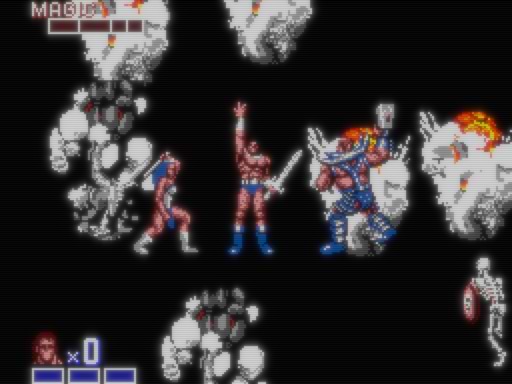