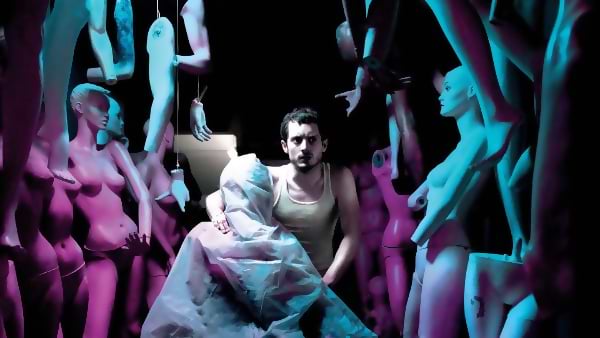 Maniac (a remake of the 1980’s film of the same name) follows Frank, a young man who restores vintage Mannequins by day and stalks the streets of LA for victims to scalp by night (played here by a seldom seen Elijah Wood). As the film progresses, he befriends a pretty French photographer, which soon develops into an unhealthy fixation, and gradually sucumbs to a psychosis triggered by unresolved childhood trauma (all the murdering he’s been doing might have more than a little to do with it, too).

Stylistically speaking, it’s a nice synthesis of American slasher and arty Italian giallo, with an excellent retro synth soundtrack enhancing the moody atmosphere. I actually liked the soundtrack so much I obsessively listened to it on repeat for weeks after watching the film (it's easily found on Spotify if you'd like to listen to it). Overall, I’d say the film has a definite late 70’s Taxi driver feel to it.

The main stand out gimmick? Most of the action takes place through the viewpoint of the main character. Yes, the film unflinchingly forces you to witness the suffering of Frank’s victims through his own eyes. Unless you’re some kind of psychopath, it’s a set up likely to make you squirm in your seat. More disturbing still, it might even make you feel a little bit complicit in the horror unfolding before your eyes. It’s horrible, so why can’t you look away?

Using a POV technique in a horror film might be nothing new (Peeping Tom first used it way back in 1960), but that doesn’t mean it’s any less effective for it. Because of this, I’d say Maniac ranks as one of the most disturbing horror films that I’ve ever watched. This is saying something, because I’ve watched a lot of horror films. So yeah, a difficult watch. A film to be endured. You have been warned!

How to describe it in one line? Driller Killer, meets Peeping Tom, meets a very fucked up Mannequin.

It's not particularly gory, nor does the film feature an especially high body count. However, the violence is strong and fairly realistic and each kill is difficult to witness. So for these reasons, I have scored it higher than I might otherwise have done.