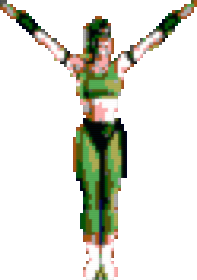 One-on-one brawlers are few and far between in the Sega Master System's library of games. There's Domark's risible conversion of Atari's Pit Fighter (the less said about this pitiful effort the better). The decent but very rare, and thus now very expensive Masters Of Combat. Tectoy's mediocre conversions of Street Fighter II and Mortal Kombat 3, both ultra rare Brazil exclusives. In South Korea; Jang Pung II, a weak unlicensed Street Fighter 2 clone and Jang Pung 3, an impressive original fighter from the same developer centered around a quest to defeat a Nazi cyborg (which, despite some terrible music, is considered by some to be among the best 8-bit fighting games ever made). And finally, Probe's conversions of the first two Mortal Kombat games. That's pretty much your lot.

Thankfully, I can report that the first game in this infamously violent series is neither bad nor especially rare, typically fetching anywhere between £5-£15 on a well known auction site. Unfortunately, the second game is fairly expensive on the used market and I've yet to track down a copy to play for myself. And since I don't believe in reviewing emulated games, I won't reviewing it here.

In my opinion, Probe Software are one of many unsung heroes of the early 90's gaming scene. They really knew how to get the very best out of Sega's hardware of the era. Best known for some stellar conversion work for the powerful Mega Drive, in their capable hands many of those same 16-bit titles made a tricky transition to 8-bit hardware without losing too much of their essence. They also produced a handful of half-way decent licensed games. Perhaps it was their focus on conversion work and licensed titles that held them back from greater recognition? Whatever the reason, their Master System / Game Gear port of Mortal Kombat is no exception and stands as a fine testament to their programming wizardry. 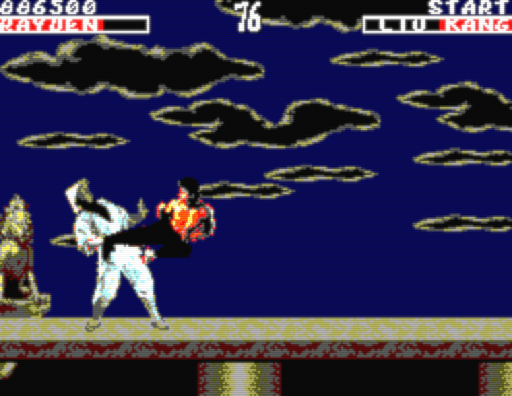 Of course, to squeeze a state of the art 16-bit arcade game down into a paltry 8-bits necessitated some pretty big sacrifices. There are only two stages to fight in, Goro's lair and the "Pit" (can it still be called a pit if it's missing, well, an actual spike filled pit?). Only two chip tunes accompany the action and of course there are no voice samples. Sadly, it's up to you to say Scorpion's iconic "Get Over Here" taunt. There is no Kano or Reptile to play as and gigantic penultimate boss Goro looks a little stunted here. What remains however is a reasonable replication of the core game play. Each character's move set is mostly intact (including fatalities), but the timing to execute each move feels a little slower and more deliberate. This takes some getting used to if you are familiar with a different conversion. Just like its big Mega Drive brother (and unlike the embarrassing Super Nintendo version), with the aid of a code you can even crank up the blood and guts. It amuses me no end to think that Nintendo's flagship console got upstaged by yesteryear's scrappy little 8-bit. Is there any point to Mortal Kombat without the gory OTT ultra violence?

So is this conversion of Mortal Kombat worth a second look? Only to the curious or the incurably nostalgic, perhaps. But no, not really. Then again, the same could be said of the Mega Drive, SNES or even the arcade versions of the game. Truth be told, these days MK1 is little more than a cultural artefact. As the beginning in earnest of the edgy, boundary pushing culture of the early to mid 1990's, it's an important milestone towards the future of gaming to come. But as a game, it would quickly be surpassed by its many sequels and contemporaries and remains (as was the case in 1992) a pallid distant second to Capcom's all conquering Street Fighter II.

With all that said, there is still some fun to be had here and for what it's worth, Mortal Kombat is hands down the best value 1 Vs 1 fighter available for the Sega Master System. A dubious accolade? Maybe. But if you've really, really got to have at least one fighting game in your collection (and don't fancy selling a kidney to get it), there's simply no other competition.

Alternatively, you may wish to track down the more widely available Game Gear version. It's the same game, but slightly more fluid game play wise. The digitised fighters look impressively big on a small screen too, with the low resolution and smeary LCD technology of the day smoothing out some of this particular conversion's visual shortcomings. 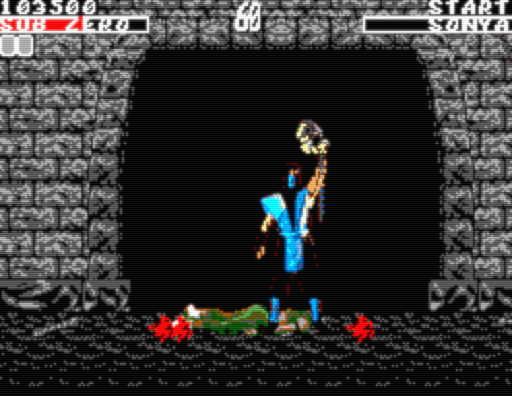