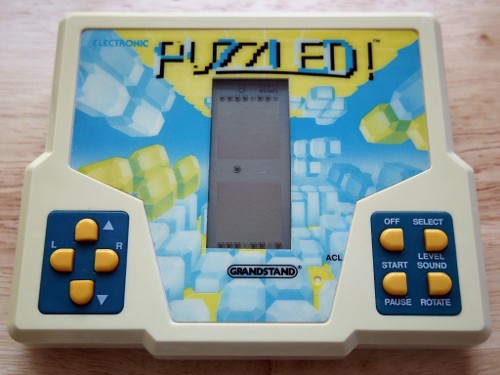 Tiger Electronics games are a bit of a punching bag for many gamers of a certain age, though I'm not really sure why. Getting a Tiger game instead of the one you really wanted seems like peak first world problems if you ask me. It's a good problem to have. Get over it, bro. That said, it's very easy to dismiss these handhelds as nothing more than cynical cash grabs. But while that may be true for a large proportion of Tiger's output, I think they did occasionally put out some half-way decent games. The Outrun and After Burner Tiger games, for example, do a suprisingly good job of translating the arcade originals into the limited LCD tech these devices utilise. Outrun in particular manages to include nearly everything from the original game, even the changing scenery and branching roads make the transition. All that's missing is the flag man and the excellent sountrack.

(on a side note, if you think Sega hawking its IP out to low rent tat merchants like Atgames is a new development, you are in for a rude suprise because there are quite a few Sega related Tiger games).

Initially, I mostly intended to collect only the Sega Tiger games, of which I have just four so far, but I find these games so fascinating that I've ended up with a few non-Sega ones, too. They're a bit of a guilty pleasure. I never had any Tiger games growing up, but I had some similar games (a Back to the Future III frogger style game that I still own to this day and some Zeon Nintendo watches, which I sadly don't). Ironically, these cheapo low power LCD games often got more play time than my much more exciting Game Boy. Turns out it was easier to convince your parents to buy the console than it was to convince them to buy you the steady stream of batteries you needed to power the thing.

Anyway, I digress. Enter the subject of this review: a falling block type game called "Puzzled!"

I saw this on ebay a few months back in a very sorry, grubby looking state. It's a good job it was too, because it helped me haggle the price down to £8. Sadly, it's suffered a fair bit of UV yellowing (though not so visible in the images) and since I'm not sure how to retrobrite it without causing damage, yellowed it will have to stay. But I did manage to clean it up pretty well.

So this, ladies and gentlemen, might actually be a world exclusive review, because I've not been able to discover anything about this particular game. There's no mention of it anywhere else on the web. Not even on this giant list of Tiger games. For all I know, and I doubt this, it may be the only one left of its kind. 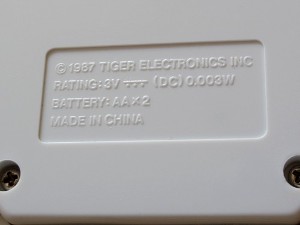 Don't be thrown off by the Grandstand branding, by the way. Grandstand were a games company that few people outside the UK are likely to recognise, but if you grew up here in the late 70's, 80's and 90's, you'd know them as big players in the tabletop and handheld electronic games market. They didn't tend to make their own games however, prefering to rebrand games licensed from other manufacturers (mostly Japanese and American). They also released quite a few pong clones and were the UK distributer of the Fairchild Channel F System II. So for a time, all Tiger games were sold in the UK under the Grandstand name. As you can see on the back, this is really a Tiger game after all.

It has the first generation plastic shell, so as a guess I would say this game was probably released some time in 1990-91 to cash in on the Tetris craze sweeping the globe. At first glance, you may be forgiven for thinking this is a simple Tetris clone. I certainly thought so, the art around the screen cheekily includes some Tetris shapes to suggest that it is. But it's actually something far more interesting; a somewhat unique puzzle game "inspired" by Tetris. 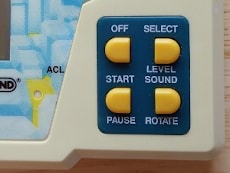 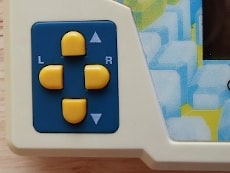 I'll take you through the controls first. On the left side we have up, down, left and right. On the right side, we have the "Off" button, the "Select Level" button, for setting a starting level (more on this later), the "Start" & "Pause" button (this also turns the game on) and finally the "Sound" & "rotate" button (the sound can be turned on or off while the game is paused). I keep the sound off most of the time. It's not too awful, just the typical annoying beeps and boops.

So how does the game itself work? Let's start with the shapes. All the shapes differ from the familiar Tetris shapes. As you can see below, there are four shapes and each shape is comprised of up to 4 blocks. We have a single block, an L-shape made up of three blocks, a line shape made up of three blocks and finally a cross shape made up of four blocks. Only the line and L-shapes can be rotated. Interestingly, while shapes are randomly selected for you by the game like in Tetris, by hitting the "Select" button you can cycle through each of the shapes, so it's actually possible to swap out one shape for another more suitable one. Once you commit to dropping a certain shape however, the shape cannot be changed and must be placed somewhere on the playing area.

The playing area itself is divided into two wells. Your shape will appear in the centre of the screen between these wells and can be rotated or moved from left to right before being placed into either the top well (by pressing up) or the bottom well (by pressing down). As play progresses, garbage lines start appearing alternately in each well. You'll spend most of the time trying to eliminate these lines because once either well fills up, it's game over. I like the fact that the action takes place over two screens. Fighting a battle on two fronts adds a nice bit of tension to the game mechanics. While you are busy clearing out one well, you're constantly aware that the other well is gradually filling up. It can be really challenging to divide your attention and keep on top of things in the later levels.

It's a really fun game and one that can easily take up an hour of your time if you're not careful. But if I do have one criticism it's this; the only score the game keeps track of is the amount of rows you've cleared. So if you're playing to get a high score, there's really no point in choosing anything but the easiest level to start on. But I suppose you could record your high scores at each starting level elsewhere if you wanted to. The game does at least save your high score as long as there are batteries present. The levels themselves range from 1 (snoozefest) to 7 (impossible).

If you want to play this game, well good luck to you. I think I was pretty lucky to find this when I did, because I've not seen it before or since. For all I know, there may be plenty of these things gathering dust in garages and lofts all over the world. Few people seem to care much for these games any more (Nintendo Game & Watch they ain't). But if you can somehow find it, I think it's probably one of the only Tiger Electronics games worth owning.

One day I would like to code a simple, browser based playable version of this game for people to try out. But that may be a long way off. I can barely code a website at present.


Wired.com article about Tiger Electronics and their Furby toy line

Play Tiger games (and others) at the Internet Archive

Tiger games at the Handheld Museum