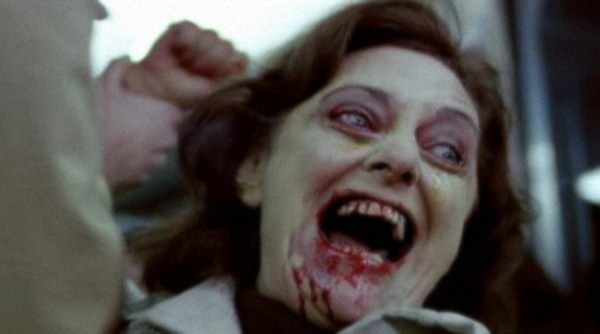 With a certain terrifying new virus currently ravaging the global population and society everywhere under lockdown, many of us now have a lot more free time on our hands. So what better time then to revisit David Cronenberg's second feature length film, Rabid?

The story begins when a young couple, Hart Read (Frank Moore) and Rose (Marilyn Chambers) suffer a near fatal motorcycle crash on a Quebec country lane. There are no general hospitals for miles, so doctors from a nearby cosmetic surgery clinic rush to the scene to treat the victims. Read escapes with only minor injuries but Rose isn't so lucky, leading head surgeon Dr Dan Keloid (Howard Ryshpan) to decide upon a radical and experimental course of action – using morphogenetically neutral skin grafts to rebuild her damaged skin and organs. Of course, this being a horror film, the doctor's unorthodox treatments come with some unforeseen medical complications for Rose... Specifically, the mysterious growth of a bizarre new organ and a not unrelated unquenchable thirst for blood. For the rest of the film, Rose proceeds to feed on the population of greater Montreal, spreading a Rabies-like contagion in her wake.

Rabid is an ambitious film, particularly for such a low-budget one, drawing elements from the vampire, zombie and contagious disease horror sub-genres into one big mash-up. The cast isn't too bad, either. Chambers, in her first "mainstream" film appearance, puts in a very good performance as the lead character Rose. It's a surprise that she made no further appearances as a scream queen, because on the strength of this film, she certainly had the chops.

It's an interesting, bold, creative take on some familiar horror themes, but Cronenberg doesn't quite successfully manage the task of gelling the pieces together. The film plods a little in places, budget constraints are evident throughout and by modern standards, it's not particularly gory or horrific.

But if you are a fan of his later work, I'd say this film is still worth watching, if only to witness the director's creative progression. While Rabid doesn't come anywhere near to the quality of The Fly, Scanners or Videodrome, it's a huge step up from his schlocky debut Shivers (a nasty and sometimes offensive Ballardian exploitation flick, which explored similar territory but with much less class and style). It's Cronenberg with his training wheels still on, if you like. But with Rabid he marks a clear statement of intent, already well on his way to becoming a true master of body horror.