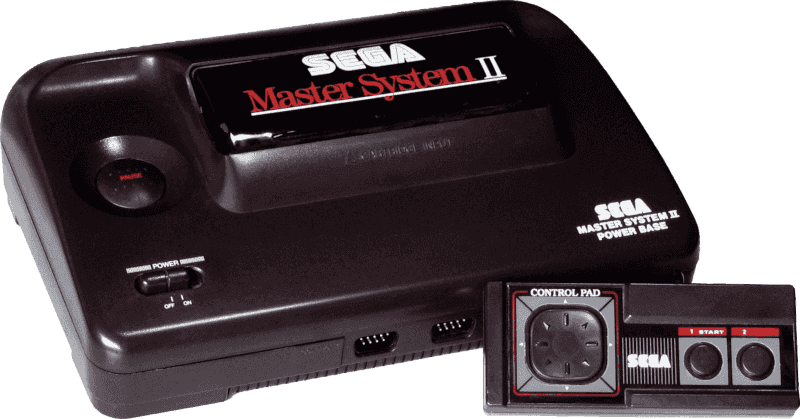 The SEGA Master System was the first console I ever played and I guess for that reason, it will always have a special place in my heart. Together with the original Nintendo Game Boy and a hand me down Acorn Electron computer, it forms a holy trinity of machines that I'll probably never part with, even if I decide one day that video games are a stupid waste of time (well, that's kind of how I feel about them now, but at least I can still say they're a fun stupid waste of time...)

In its home territory of Japan (where it was initially released as the SEGA Mark III) and in North America, it has the reputation of a cult classic. A distant second place to Nintendo's era defining Famicom / NES. But the story elsewhere in the world was a little different. To understand why Nintendo couldn't dominate the competition here in Europe, you first need to have a little bit of background on the state of the European games market at the time. The video game crash of 1983 was less of a big deal here. Mostly because there wasn't really a significant industry in place to "crash". In many ways, things were just getting started. That's not to say it didn't have an impact (comparing the Argos catalogue of Winter 84 with Winter 83, you can see there are far fewer computers and consoles for sale). But it is fair to say that cheap home computers like the ZX Spectrum would quickly step in to recoup any potential lost ground.

This parallel games industry would be supported largely by the efforts of bedroom coders turned professional, with games distributed by small regional software houses on the much cheaper medium of cassette tape. Compared with development for games consoles, it was an environment with a low barrier to entry. One that would foster companies such as Ultimate Play The Game (AKA Rare) and Codemasters, companies that would in their own ways help shape the games industry as we know it today. And for some time at least, it would mostly bypass games consoles altogether. In other words, for a time the UK (like much of the rest of Europe) would become a fierce battle ground between a fragmented and localised market of competing computers and consoles.

In a 1983 Japan and a 1985 North America, Nintendo would find itself much alone in a relative home video gaming desert. The main challenge was of convincing retailers that the wider public even wanted to play video games at home. But in Europe by 1987, they would face a different challenge entirely; how to compete in an already crowded field awash with cheap computers. By the time the NES and the Master System arrived on the scene in the late 80's, 8-bit home computers had consolidated their dominant position and 16-bit computers were soon on their way. So much so, that any game was called a "computer game" regardless of the platform it was released on. Consequently, the console market was initially very small.

The early years of the Master System in the UK were handled by budget games distributor Mastertronic (who would later become Virgin Interactive, before a final merger with Sega). Knowing that the market for cheap, pocket money priced games was already sown up by the home computer market (being major publishers in that arena themselves), Mastertronic sought to market the Master System as a powerful "premium" home arcade machine. One that would be targeted at an older aged demographic with a bit more money to spend than the typical gamer. It was a canny trick, one that they would again successfully repeat with the later Mega Drive. Nintendo, meanwhile, handed distribution of its NES console over to toy manufacturer Mattel. Perhaps because they were riding high in North America and Japan, Nintendo never really felt the need to expand aggressively into Europe. Whatever the case, enlisting a toy company to promote a family friendly (but very expensive) console to a market where computers already had kids hooked on their cheap cassette-based games was never going to be a winning strategy. Not everywhere, at least (It's difficult to find sales figures from the period, but the general consensus is that there was no clear dominant "winner" across the European games market. Nintendo did better than Sega in Germany and Sweden. In the UK and France, it was Sega who "won" the console wars).

By the time the Mega Drive had been released, the SMS had been redesigned into a friendly looking little machine with a competitive price point, aimed squarely at a younger market. This was the beginning of the Sega Master System's height of popularity here in Europe. For a short time, until at least 1993, the Master System would have an active user base greater than that of the Mega Drive! For this reason, and the reasons I mentioned above, it's sensible to divide the Master System's life into two distinct periods: the difficult early birth years of 1985-1989 and the Indian summer period of peak European and Brazilian success; 1990-1996. In 1989, Samsung also released the console in South Korea as the Samsung Gam*Boy, where it did battle with a Hyundi branded NES, Daewoo's Zemmix (a consolised MSX computer) and a whole host of famiclones.

In 1992, I was part of a generation that played the SMS when it was at its most popular here in the UK. In fact, it was the first console I ever played (at a friend's house. We played the built-in game Alex Kidd in Miracle World and from that moment on, I knew I wanted one). If my friends were lucky enough to have a games console, it was likely to be the Sega Master System. Some of my introductions to key 90's Sega franchises were master system ports, from Sonic the Hedgehog to Streets of Rage and in my later adult years, thanks mostly to the early days of eBay, I've been able to build up a fairly large collection of games for not very much money. In the UK, outside of a few games that I wish I'd hunted down, the console remains relatively cheap to collect for.

This section of my website is dedicated to reviewing the good, the bad, the mediocre, the overly ambitious and the underrated gems among the games of my own personal collection. I hope you enjoy it.

Reviews for some recent SMS clones:

Scanlines 16 takes a look at Sega history in S. Korea