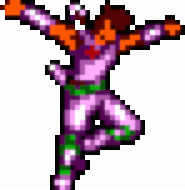 The Master System played host to some of the greatest 8-bit arcade conversions of all time. When it came to squeezing 16-bits down into 8, in capable hands it punched well above its weight more often than not. Well received classics like R-type and Ghouls 'N Ghosts head the pack. Others, like Golden Axe, Space Harrier and Galaxy Force have a less than stellar reputation among some gamers, but deserve to be lauded for their ambition anyway (for the record, I think they're great).

Strider unfortunately falls into neither of these camps. It's mediocre from start to finish. It suffers a deathly combination of barren, sparsely populated levels devoid of visual interest and treacly, joy sapping slow down. When the first boss finally stutters its way on screen, the game becomes near unplayable. Cheap deaths result, the game affords no continues and to top off what quickly becomes a frustrating experience, each level is divided into harshly imposed time limited segments. No, Strider is not a great deal of fun to play. 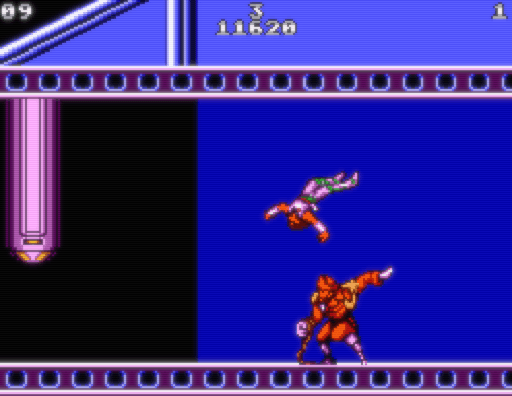 Despite being released a full year after the Mega Drive conversion, following the game's level designs quite closely and including most boss and enemy sprites, the whole thing still feels rushed and incomplete. The music is nothing to write home about, either. Gone are the atmosphereic musical transitions between level segments, to be replaced (for the most part) with an endless repetative loop of the main opening theme. It's a decent enough rendition, but after repeated plays it becomes a little tiresome.

It's not a truly terrible game by any stretch, but it is terribly disappointing. I'd go as far as to say the humble ZX Spectrum port makes a better fist of the game than this. Spartan, even when compared to the Master System conversion, it at least has the decency to offer up Strider's fast and fluid game play. Surprisingly, it even boasts some bold, nicely detailed, well-animated sprites! Ironically, developer Tiertex also handled the Speccy conversion. If they could work wonders with a much more limited machine, what went so wrong for them here?

A shame, then. Especially considering Sega's own conversion for the Mega Drive is genuinely one of the key reasons to own their 16-bit console. Play the orginal arcade game. Play the excellent Mega Drive conversion. Heck, even play it on the Speccy. But if you want quality side-scrolling ninja action for your Master System, steer clear. Spend your money on Ninja Gaiden or Shinobi, this one's for lovers of goofy Flash Gordon-esque artwork and collectors only (I picked up my copy in a charity shop, so I don't feel too bad about wasting money on this game). 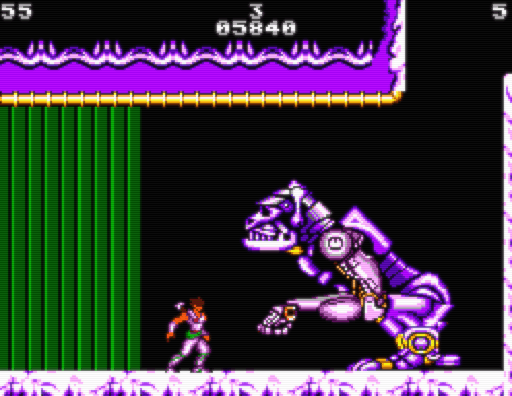