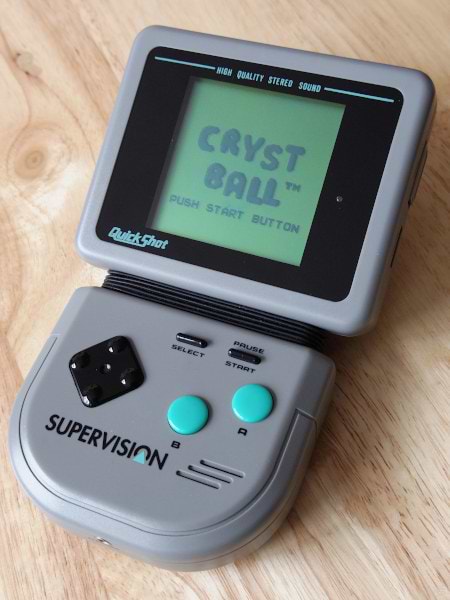 As you can probably tell from the content of my website so far, I'm a keen handheld gamer. It's my preferred way of playing games these days. As a result, I've developed a bit of an obsession for some of the less popular Handheld games consoles. What I've got to share with you today is one of my rarer ebay finds.

I've already looked at a few notable challengers to the incredibly successful Nintendo Game Boy line; Bandai's reasonably popular late 90's WonderSwan and Epoch's not-so-popular Barcode Battler. But these companies weren't the only ones to try (and fail) to take Nintendo's portable gaming crown. Over an impressive 14 year lifespan, Nintendo's modest console was able to defeat a staggering number of foes. From technically impressive beasts like Sega's Game Gear and Atari's Lynx, with their bold and colourful backlit screens, to low-tech operations like Tiger Electronics and their dirt cheap but very basic LCD games, all would fail to unseat Nintendo from their place at the top of the tree.

But it wasn't just the big dogs of the video gaming market that Nintendo had to worry about. Earlier in the Game Boy's lifespan, a few much smaller companies would try to beat Nintendo at their own game. They would release their own low price machines to vie for the same middle ground between the high and low tech portable gaming products already available on the market. One such competitor was Taiwanese based Watara and their Supervision line of systems. Over here in the UK, peripheral manufacturer Quickshot would take up the task of promoting and distributing the console (enlisting the help of a local industry player was a strategy used by Watara to help keep costs low in most markets; for example in Germany a Company called Hartung supported the system). 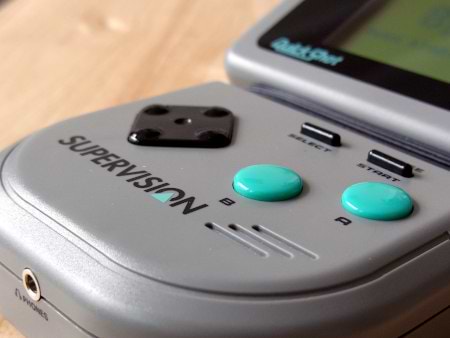 What really drew me to the Supervision was its striking looks*. I really dig the design. I love the turquoise and grey colour scheme and the ultra 90's looking logo. I like the quirky bend in the middle that allows you to adjust the screen for a better viewing angle (though the rubber covering is a bit of a dust trap). And unlike the Game Boy, it was designed to be held by actual human hands! With its rounded edges, it feels very comfortable to hold. Next to the Game Boy, the screen is huge and luxurious and roughly comparable in quality. It has the motion blur typical of these kinds of screen for sure, but it's not much worse than the blur present on the original Game Boy screen and the larger dimensions more than make up for this shortcoming (though it should be said that some people disagree with me on this). When they released the console in 1992, Watara / Quickshot offered the console and games at the lower price of only £50 for the console and around £15 for each game.

My example is in great condition and among my best ebay bargains, only costing me around £15 for the system and two games (uncommon but not super rare, they usually sell for between £30-£60 pounds).

Speaking of bargains, if you do find one of these listed as "faulty" because it won't turn on, consider putting in a bid. It may be a very simple fix. The poor quality components in these consoles oxidise over time and I had to use some electrical contact cleaner on the power switch before mine would even turn on.

It has a nice design, a low price and good battery life, so how did it fail? What went wrong for Watara? 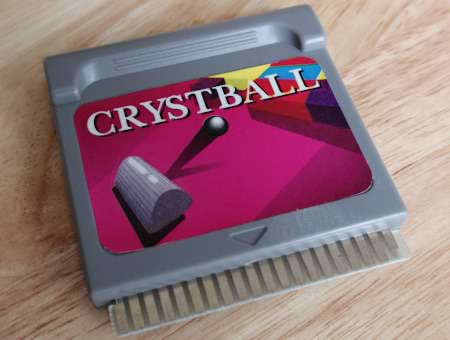 Weeeell… it's the games. The games are the real fatal flaw of the Watara Supervision. Most games developed for the system were made in house or by fellow Taiwan-based developers such as Sachen and Bon Treasure (I can find no information online about this company) with a hand full of games coming from British developer Bits.

I have only two Supervision games in my possession. The first is the pack in game "Crystball", a rather uninspired if perfectly serviceable Breakout / Arkanoid clone (the Supervision's most common game and included free with the system in most territories). I had a decent amount of fun playing this one, but then I do enjoy this style of game. With its three difficulty settings, monster generators and range of power-ups, it certainly offers more variety than Nintendo's own rather tedious Alleyway release. If it has a terrible weakness, it's the scratchy, mercilessly repetitive looping soundtrack. You'll definitely want to play this game with the sound off.

The Second game is a straight rip-off of Nintendo's F-1 Race, right down to the car sprites. It's not terrible by any means, just OK. The music, however, is some of the worst I have ever heard. When I first played this game, I actually thought something had gone catastrophically wrong with my console's sound chip, but nope, it really is that bad. Therein lies the problem with much of the Supervision's Library, it mostly consists of poor imitations, lacking to some degree the polish and quality of the originals. We should give Watara and their developer partners some credit for bringing a repectable 66 games to the system in the short time that it was on the market, but it cannot have helped their cause when so many of these games lacked much in the way of originality or quality control.

It's a shame then, because I think the console really had a lot of potential. Of all the early competitors to the Game Boy, in some ways I think the Supervision had the greatest chance of loosening Nintendo's strangle hold. As much as I love my Game Gear, Sega's high-tech marvel had little chance to compete with Nintendo's offering on cost and no chance of competing on battery life, but Watara could clearly be competitive on both fronts. Had Quickshot been able to leverage some of its UK games industry influence to entice talented 8-bit developers itching to develop for the Game Boy, but left out in the cold thanks to Nintendo's draconian licensing policies, the console might have had more of a fighting chance here. Watara did, however, manage to Eke out something of a market in Italy, where the console is no doubt fondly remembered by those who grew up playing it (many of the games for sale on ebay seem to originate from Italy). It was even promoted with a TV ad campaign. Here's a link to one of the more amusing adverts for the Supervision, featuring a forlorn looking kid playing a Game Boy alone while his friends crowd around the much more "exciting" Supervision. Poor little guy.

The Supervision did have one (albeit small) influence on the Handheld market; there's some speculation that Nintendo were forced to drop the price of their own system much sooner than they might have liked, heading off a potential challenger and thus sounding a death knell for Watara's hopes. Nintendo denied this at the time, however.

Sadly, for most of us, the Supervision would become just another historical footnote to Nintendo's all encompassing handheld domination (a footnote I would know nothing about if not for the Internet). 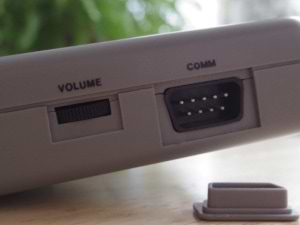 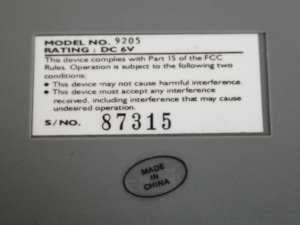 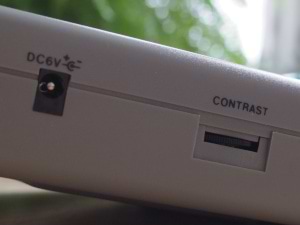 I'm pleased to have added a Supervision to my collection (especially for such a low price) but should you get one? I think you probably already know the answer to that. If you like obscure handhelds, I bet you're already scouring ebay auctions looking for a good deal (it's worth what I paid for one, but not much more). But if you just want to play some good portable retro games, this isn't for you. You're better off sticking with a GBA SP. Supervision games are terrible, expensive and just not worth collecting. Outside of a puzzle game called Pyramid, I have little desire to expand my collection much beyond the games I already have.

So there we have it, the Watara Supervision. Nice system, shame about the games.

*I should note that Watara initially released a Supervision model with a more conservative (and potentially copyright infringing) Game Boy look. An extraordinarily rare third version was also released copying the Game Boy look again, but much less closely.

Another fansite at Discman.com. Lots of nice box scans and sound samples to be found here

Information about Sachen (a major Supervision developer) at BootlegGames Wiki

Assembloids: A brand new game for the Supervision!

The Supervision reviewed on the RetroGameCouch