Here is where I'll be sharing some of my Tetris Hi-scores. Skill wise, I don't rank among the best players in the world, but I hope my scores are at least somewhat respectable. All scores are achieved using genuine hardware. 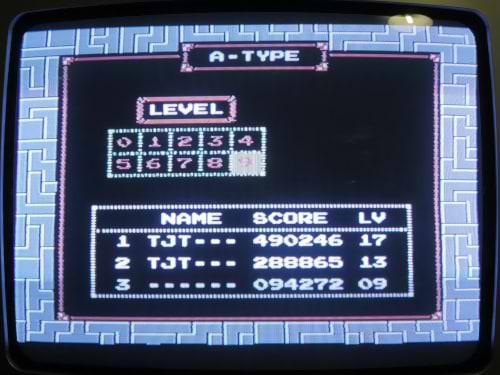 Once upon a time, I harboured dreams of going to Copenhagen to compete in the Classic Tetris European Championship. But nowadays, I'd only be going to Copenhagen for a holiday! I'm simply not good enough to be competitive. A few years earlier, I even sent a videotape of my own world record attempt to Twin Galaxies (this was back when they only accepted videotapes). However, it was around the time TG referees started quitting the organisation and the company was in the process of changing hands, so it was never recorded. Or maybe it just got lost on the way to America. In any case, I could have been the "official" (but likely unworthy) world record holder for a short time before competition really started to heat up. Ah well, never mind.

Since originally writing this webpage, competition in the classic Tetris arena has exploded, with many extremely strong players arriving on the scene in recent times. Indeed, competition of late has become so intense, it feels almost redundant to make a statement on the state of the competitive scene as of 2021, since whatever I write here is likely to become old news in next to no time at all. But in short, a new technique called "rolling" (created by Cheez_Fish) has allowed players of the game to post scores of over 1 million points, with 2 million proven to be possible! Rolling could become the dominant play technique for high level players in the near future, replacing the previous technique of "hypertapping" among the strongest players, but who can say for sure? Needless to say, both of these techniques are way beyond my feeble abilities. 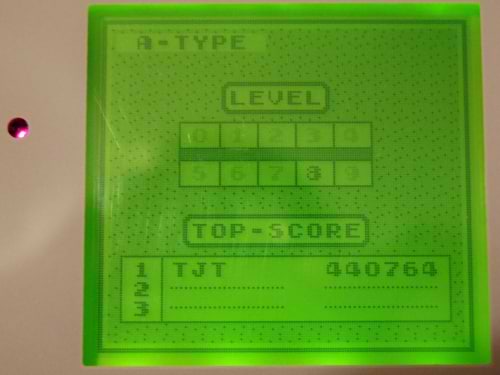 For some reason, the original Game Boy Tetris doesn't get the same respect in competitive circles as the NES version, despite having an actual two player mode. I'm not sure why. It's certainly the version of Tetris people of my generation played the most. The world record for this game is held by Alex Holbrook with a maxed out score of 999,999.

Fun fact: Steve Wozniac (co-founder of Apple Computers) is a huge Tetris fan and also a strong player. His score of 507,110 for the Game Boy version of Tetris currently ranks (officially) as the 19th highest score in the world. 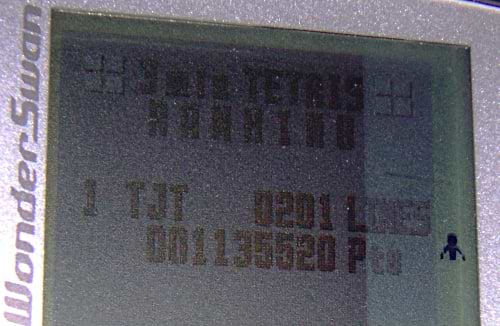 I love Wonderswan Tetris. Outside of the Game Boy and NES versions, it's my favourite version of the game. It's kind of a transitional game in the sense that it contains elements of both classic and modern Tetris. It's classic because it doesn't reward T-spins* but modern because it implements most known rules of the official Tetris Company guideline. In my opinion, it's the best of both worlds.

You get 1000000 points for a perfect clear, which is what happened here. 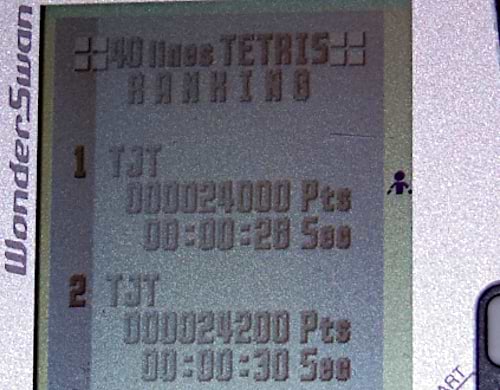 I can't find a hi-score database for this game anywhere online, so I don't know how my scores compare with others.

*I honestly can't get my head around T-spins. I feel like I'd need to unlearn everything I know about Tetris in order to master them, so I tend to prefer classic variants of the game as a result. 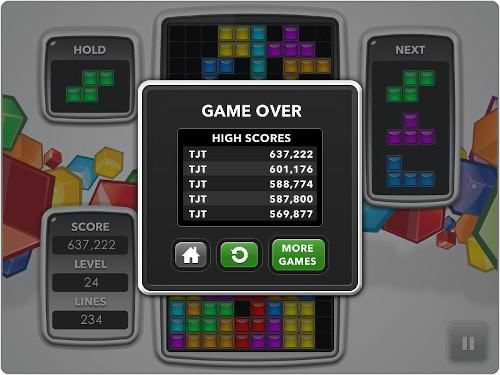 But you don't need to own an antiquated video game console to play Tetris in this day and age, you can also play an official version of Tetris online for free (Marathon mode only). Play beyond level 24 is essentially impossible for me, yet I have seen some players post scores of over 1 million points. (If you can do the same, you have my respect!)

In any case, see if you can at least beat my high score!

--> Always leave a space for the square piece

The square piece is the most awkward tetromino to place. Unless it has at least two flat blocks to sit on, it's liable to mess up your stack. So always keep a good spot to set your square piece. This also ties in with the concept of "playing flat" (in other words, making sure the top of your stack is as flat as it can be).

By the time a tetromino has appeared on screen and is being manoeuvred into place, high level Tetris players are already thinking about where the next Tetris piece should be placed. The next piece box is forever in their peripheral vision and they always think at least one piece ahead (or several pieces if the variant allows it).

The game won't always give you an optimal piece (for example, you might start the game with an S or a Z piece). In this situation, you can easily see a way to tuck an L, J or T shape under a Z or S shape. Learning how to "tuck" tetrominoes into each other is a vital skill to learn if you want to be able to build a clean stack.

--> Learn how to rotate both clockwise and anti-clockwise

Remember that you can rotate your tetrominoes both clockwise (A / right button) and anti-clockwise (B / left button). Master this concept. It won't matter so much on the earlier levels, but this is a vital skill to learn for play at high speeds. It could mean the difference between good piece placement or a game ending mistake.

--> Play at the highest speed you can stand

I am currently trying to learn how to play NES Tetris consistently at speeds of level 16 and over. I am not finding this easy at all. I can barely survive 25 lines before I make a fatal mistake and it's game over. While it may be stressful, I find that play at this speed really helps to focus my brain into Tetris mode. Dropping down a level after so much intensity feels slow in comparison and thus much more manageable. As the levels come to feel more manageable, you'll see that reflected in higher scores.

Don't worry so much about achieving hi-scores or getting a string of Tetris back-to-backs at this point. After all, if you keep topping out because you're always waiting for that elusive I shape, you won't be breaking any personal records.

So you made a mistake and dropped a piece in the wrong place. So what? Stay cool. On the slower modes at least, it's almost always possible to fix your mistakes with a bit of problem solving.

--> Practice only one version of Tetris at a time

To the uninitiated, Tetris might seem like one game spread across multiple platforms. And while they all share the same basic DNA more or less, each game has its own unique feel and peculiarities. They are different enough to the degree that switching from one version of the game to another can seriously throw off your rhythm. So I recommend focusing your efforts on one Tetris game at a time.

Pushing yourself to play high level Tetris can be a gruelling and frustrating experience at times. Don't be discouraged. If the game stops being fun, walk away for a while. Afer all, games are meant to be enjoyable.


BACK TO THE SHRINE