It's the review you've all been waiting for. Yes, we are going way, way, way back to 1985 to take a look at one of the earliest releases for the system - TransBot.

TransBot is one of those games that inevitably ends up being kind of a joke to everybody. The last lonely game left at the bottom of the bargain bin. The kind of game you cruelly trade with an unsuspecting younger sibling for a game that you know is so much better. The kind of game that fans of a certain other 8-bit console hold up as living proof that the Master System just isn't worthy of your attention. The Japanese have an wonderful expression for games like TransBot: "Densetsu no Kusoge", which translated means "legendary shitty game". But is TransBot a legendary shitty game? Or just a shitty game? Or perhaps not shitty at all? Read on to find out.

You don't need me to tell you that TransBot takes obvious "inspiration" from contemporary real robot anime series of the era, with a little bit of Star Wars sprinkled on top for good measure. No, originality is not this game's strongest suit. But you know what, TransBot is surprisingly fun. There's no denying that the game is a primitive, no frills shooter. Weighing in at a tiny 32KB and originally released as a budget Sega card game, it's bound to be. But however basic it may be, scrolling and enemy movements are smooth, collision detection is spot on and the difficulty level is staggered brilliantly. The game never throws you in at the deep end, only gradually introducing tougher enemies, eventually putting so much on screen that it becomes quite challenging. Sure, it may be a little bland and derivative, but the vital ingredients of any good shooter are all present and correct. The only gameplay frustration here is the random element introduced in selecting a power-up.

Cheat Code: Hold down on the D-Pad and button 2 on your controller before booting up the system. This will give you access to a secret menu (along with the option to slow down the power-up selection cycle).

As for the power-ups, there are seven on offer, lettered A-G. "A" is the peashooter strength weapon you start the game with, "B" is a slightly improved beam weapon, "C" is sword fire, a near unstoppable wide ranging attack and the best power-up in the game, "D" is the cannon (similar to the Laser in Gradius, this'll rip through any enemies caught in its line of fire), "E" is the diffuse beam, a spread shot with a laughably useless short range and "F" gives you bi-directional fire, but since most enemies attack from the front, this is of limited use (it also depletes very quickly). "G", the final power up, will replenish both your ammo and your power level, the latter essentially serving as your life bar. Weapons C,E and F will transform your ship into a robot, but as I noted earlier, only the C power-up grants you enough firepower to compensate for making you a bigger target.

With only two looping levels, two monotonous musical themes and one solitary boss to defeat, there's really not much to TransBot. It's basic, but it's basic done reasonably well. It recalls to mind early Famicom shooters like Namco's Macross and Jaleco's Formation Z. If you like those games, you'll probably like TransBot too. In my humblest of humble opinions, TransBot is a forgotten old school gem (and when I say old school, I really do mean old school). TransBot is much like life. Lower your expectations and you might even begin to enjoy yourself.

As of writing, there's certainly a plentiful supply of TransBot cartridges on ebay should you desire a copy. A clear sign of the game's high quality and overwhelming popularity, I'm sure you'll agree. 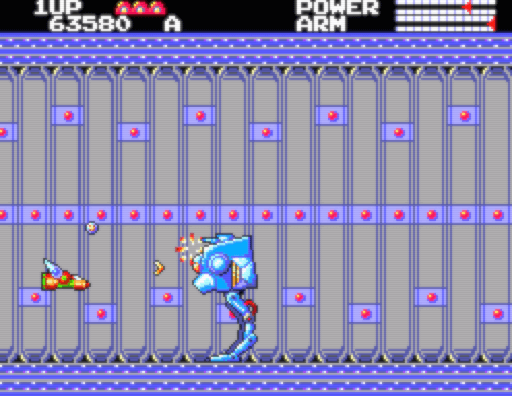