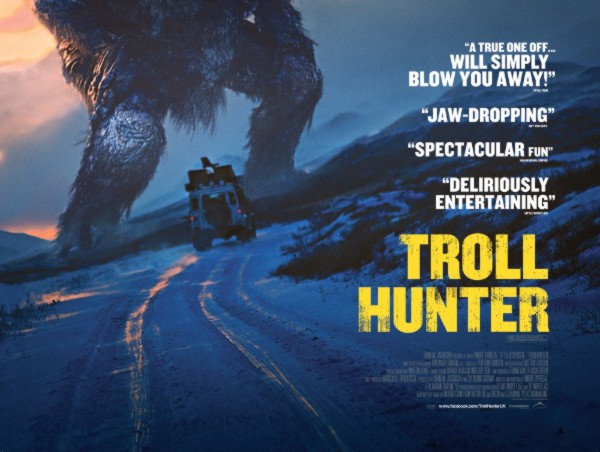 Found footage films might be done to death by this point, but don’t let that put you off, because this one is superior to most. It’s an excellent Norwegian folk horror mockumentary following a group of film students on the trail of an illegal bear poacher. Of course, they’re not really following a bear poacher at all, but the film’s eponymous Troll Hunter. Hired by the Norwegian goverment to contain Norway’s errant Troll population, his unhappy lot in life provides much of the film’s droll low-key humour (if you’ve ever wondered what the worst job in the world might be, Troll Hunter would certainly be a strong contender). For such a low budget monster movie, it has some suprisingly convincing special effects, with each of the various species of Troll being very well designed (some of which are based on John Bauer’s charming illustrations). And of course, there’s all that lovely nordic natural beauty to admire as well.

I think it’s a much more entertaining film than other popular monster movies of a similar vintage, such as Cloverfield (with its easy to hate characters) and the even lower budget and very boring “Monsters” (What Monsters? I’ve never felt so cheated by the title of a film). I suspect only the Norwegian language prevented it from finding the audience it deserved outside of Norway, because any subtitled film is fatally relegated to the obscurity of the art house. Fortunately, I was lucky enough to catch this at the cinema anyway. (P.S. There is an English language dub of the film included on the DVD but I’ve never watched it. Did this find a release in American cinemas, perhaps?)


You could almost watch this film with the whole family. It's rated 15 though I'm not sure why. The DVD box warns of "sequences of sustained intense threat". Make of that what you will.

BONUS: Here are the words of a troll woman from Snorri Sturluson’s Prose Edda, because I like ‘em (translated by Anthony Faulkes):